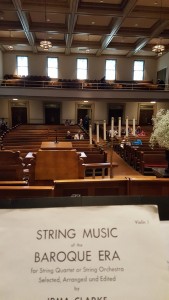 This weekend, Jet Set Strings played as a quartet, and I had the opportunity to choose wedding music from our Baroque repertoire. Even though the Baroque is part of the larger Classical genre, it’s a subset that was written between about 1600-1750. The list is long, but some of the big players in the composing world were Handel, Corelli, Bach, Telemann, Purcell, Rameau, Vivaldi and Pachelbel (Canon in D). Technically, the progression goes like this: Renaissance music, then the Baroque, then the Classical. In today’s terms, when clients are looking for the Classical sound for their wedding, it includes all below. One of my faves is La Rejouissance. It was part of a suite to accompany fireworks in London in 1749, and yesterday in 2016, I put it in the prelude. It would also be a good exit/recessional piece for a wedding ceremony – it’s a celebration!

Seating of the Mothers:
Flower Duet from Lakme (Delibes)

Hymns:
For the Beauty of the Earth
Blest Be the Tie that Binds